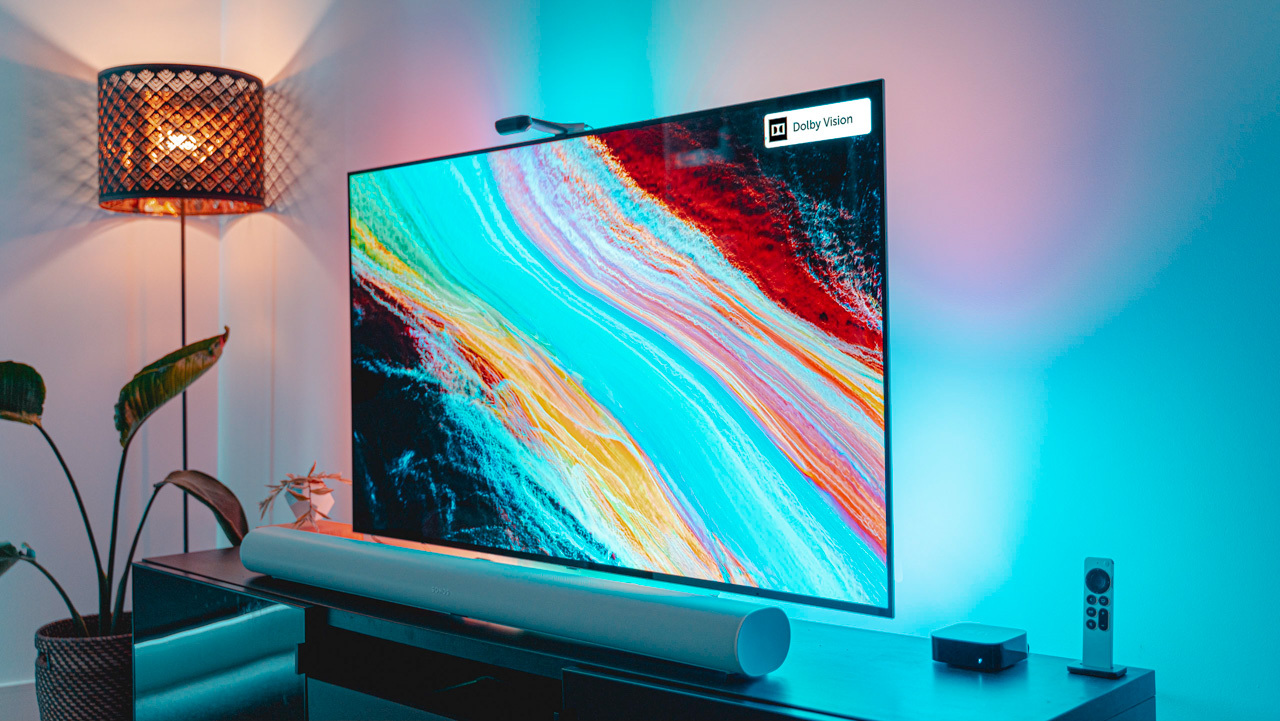 Here’s possibly the best TV setup upgrade and overall smart lights I’ve bought so far, especially for the price. I unboxed the Govee Envisual T2 TV backlights, set them up, and put them through their paces on the TV for shows, movies, and, of course, gaming, and I can say they’re a significant improvement over the Govee Envisual T1 light!

They’ve added so much depth to my screen and taken my cinematic experience to the next level for less than $150. It transforms your cinematic TV experience from Netflix and movies to gaming; everyone who has visited has been impressed.

The T2 scans the content you’re watching with Govee’s Envisual technology, matching the colors it sees to project those same colors onto the wall behind your TV.

It’s done with an external dual camera to sync the LEDs, so it works with literally any content displayed on the screen, unlike Philips Ambilight, which requires an HDMI cable.

If you’ve seen my other videos, you’ll know that I previously had static Philips Hue lights installed behind the TV that didn’t dynamically change colors based on the content, so I was really excited to test this out.

The first thing you’ll notice about the Envisual T2 is the new dual camera, which is about 6 inches in size and looks like a large webcam pointing down towards the TV. It’s spring-loaded and has a USB Type C input.

The light strip has 60 RGBIC light beads per meter, which is double the amount in the original Envisual T1, which had 30 per meter.

It also includes an Independent Chip, which allows the lights to display multiple colors at once rather than just one.

You also get a controller box with 3M adhesive tape, but I prefer to use the companion app so I can stay on the couch and be lazy.

Thanks to the companion app’s instructions, the set-up was a breeze.

The first thing you’ll want to do is wipe down your TV with a wet wipe to ensure a dust-free surface that will make the strips stick properly. Alcohol wipes are included in the box, which is really handy.

Then just follow the light strip installation directions on the app. Make sure to neatly loop it so you don’t get any nasty wires from being seen. The placement is important so the entire TV is captured by the camera.

You might be concerned about the camera protruding from your TV, but in the dark, when all of the Envisual lights are turned on and you’re watching the content on the TV, you can’t see it at all.

It looks amazing, and the lights are brighter than I expected, but it’s about to get even better.

The companion app is simple to use and an essential component of the Envisual T2 because it is where we calibrate the lights.

Personally, I think it looks best when the saturation is set to 80% and the white balance is adjusted using a white image on your TV screen. Then turn on Part to get that really nice visual effect where each section is lit up in a different color depending on what’s on screen.

The app also allows you to sync the lights to music, create custom scenes when the TV isn’t turned on, set a sleep timer, and even extend the lights to sync with other Govee lights.

I’m blown away by how good this looks and how quickly the lights react to the images on screen and reproduce their colors.

My setup isn’t even close to the wall, and I can only imagine how much better this would look if I wall-mounted this TV, which I intend to do soon.

Based on the color wheel I tested, you can see that the colors are being extended right onto the walls surrounding the TV, not only making the TV appear larger than it is, but also drawing you into the TV more than the TV could by itself. The immersion effect is so nice and natural even in a random YouTube video I found.

All of this is thanks to the ultrawide 180-degree dual lens for full screen coverage, which employs an algorithm that does an excellent job matching colors with minimal lag.

Now let’s talk about movies and the cinematic experience.

And I’ll go so far as to say…you haven’t watched home movies until you pair them with this Envisual technology.

There’s something about seeing the illuminating light sabers in Star Wars extend into your living room walls that draws you even deeper into the Star Wars universe, especially during the forest showdown scene between Finn, Rey, and Kylo. This looks absolutely incredible.

This is due to the Envisual T2 dividing the screen into zones and mapping them to the backlights.

Another scene I had to see was the bike scene in Tron Legacy.

As you can see, the simple white and orange palette is nicely replicated behind the TV. The darker hues are nicely displayed and integrated so that it does not appear blotchy or anything – those zones are dimmed down.

Just a heads up: the backlighting in some movies can be distracting, but it ultimately comes down to personal preference.

When in game mode, the lights react even faster to the content, allowing for fast-paced gaming like Mario Kart.

The camera does a surprisingly good job of keeping up with the action on-screen even when drifting through various environments or slowing down when you get wrecked by dreaded items. Gotta love and hate Mario Kart.

I’ve tested these lights in a variety of games, and they all look amazing simply because there are so many different colors on screen at once.

For $150, this is a really solid and simple TV setup upgrade, particularly when compared to the older Envisual T1.

The T2 has a denser LED strip than the T1, the colors are apparently 40% more accurate, it recognizes the same colors much faster, and it is significantly brighter.

This is due to the upgraded LED light strip, the upgraded chipset, and, of course, the new dual cameras, all of which work together to improve its ability to capture and imitate the pixels on the screen.

Govee has done an excellent job in establishing itself as a feature-rich smart light company at a much lower price.

Costing nearly 80% less than other big brands, you can overlook the camera being mounted above the TV rather than going through HDMI natively.

I’ve been absolutely enjoying these new backlights; I can’t wait to install a new TV in the living room and then set these lights up on the floating setup. After some testing, I recommend leaving the lights on game mode because the camera reacts much faster in this mode and has a more accurate color reflection.