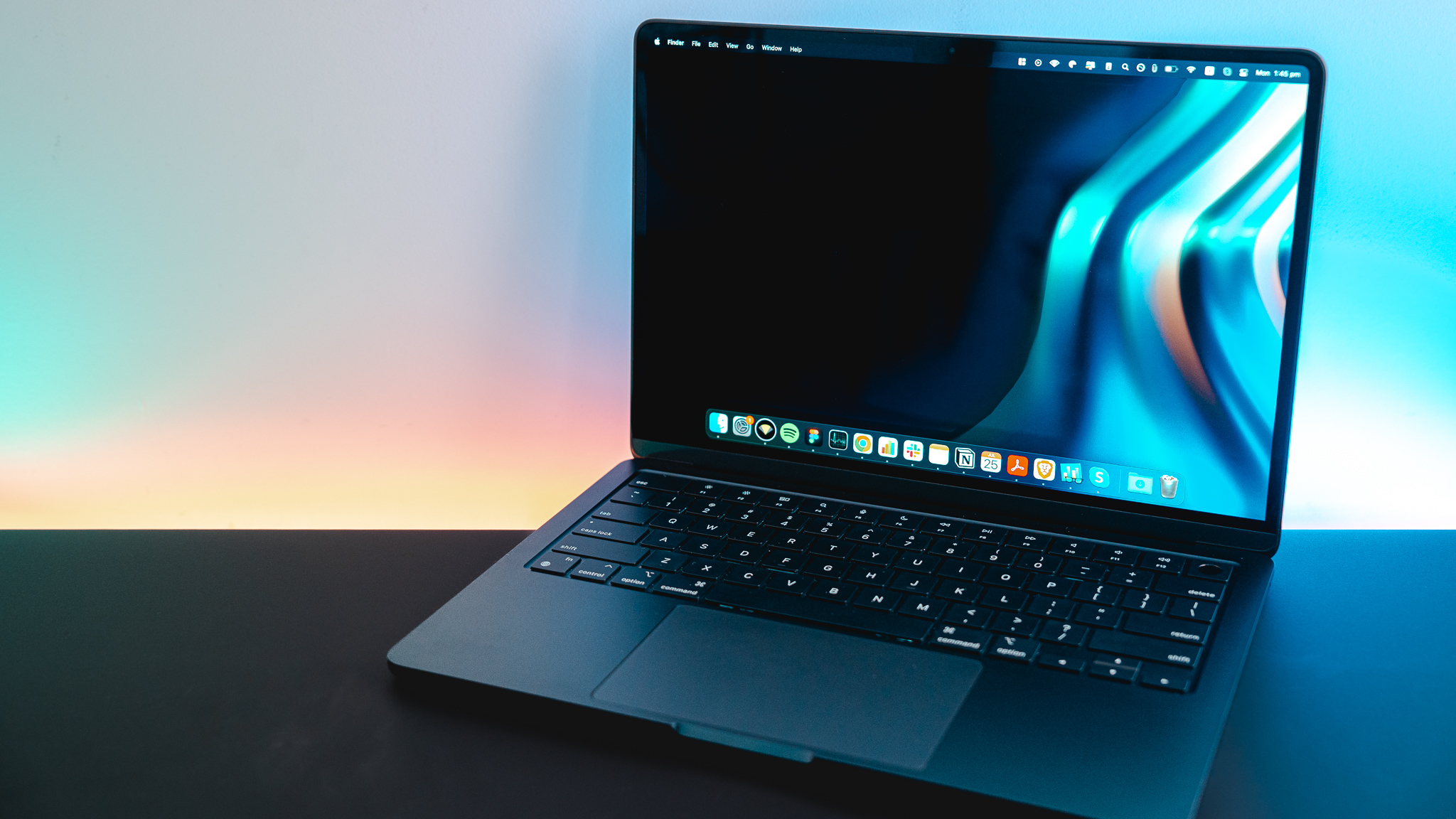 Can you believe that Steve Jobs took the first Air out of an envelope almost 15 years ago?

A lot had changed since that presentation when it seemed like the Air was more about looks than function. Now, Apple has brought out a new generation of the Air that has been redesigned, and it is one of the first Macs outside of the 13″ MacBook Pro to get an M2 chip.

Here’s my review of the new MacBook Air M2 after using it for more than a week since it came out.

This is the base model I paid for out of pocket, with the 8 Core CPU, GPU, 8GB Memory, and 256GB SSD Drive. And there are a few drawbacks such as performance throttling and the SSD’s slower read/write speeds.

I like the base model, and it should be a good fit for casual users, students, writers, or business owners, to name a few use cases – but overall, this is a Mac for those on the go.

You’re probably aware that the new Air has a new ‘AIRY’ price tag. Yes, that was a terrible pun.

Given the fierce competition in the ultraportables category and the recent release of competitors such as Dell’s XPS 13 Plus, it is a significant premium.

But I’m not sure it’s fair to compare the new Air to the Pro line of MacBooks, but I can see why they are – it’s $100 less than the 13-inch M2 Pro, and we get a better screen, webcam, MagSafe, and a lighter, thinner design on the Air.

The SSD’s significantly slower read/write speed is possibly the most disappointing aspect of the new Air, something you should carefully consider before purchasing this laptop, and here’s why.

Instead of using two NAND flash drives at the same time, the new M2 Air and 13″ Pro use a single NAND flash drive. Hard drive speeds have nearly been cut in half as a result of this change.

In almost every test, from Black Magic to AmorphousDiskMark, I get a write speed of around 1,600 MBPS and a read speed of 1.400 MBPS, compared to 5,000 mb/s read and 5,700 mb/s write speeds on my M1 14″ MacBook Pro. And that’s across at least ten different tests administered at various times throughout the week.

However, the Air’s read-write speed is still faster than what MOST people require, especially for those considering an Air over a Pro – but slower SSD speeds do mean a slower and worse experience when exporting large files, multitasking, transferring large files, and gaming, for example.

The Air uses a new higher density NAND that delivers 256 GB storage using a single chip,” while “benchmarks may show a difference in performance, these M2-based systems for real-world activities are even faster.” – Apple spokesperson Michelle Del Rio, The Verge.

So they’re basically saying that while the read/write speeds are slower, the M2 processor compensates. Apple has a point, but it feels like two steps forward and one step back.

Another significant disadvantage I’ve discovered with this M2 Air in the last week is performance throttling and the underside of this laptop gets uncomfortably warm.

This is due to the fact that, under heavy load, this laptop appears to overheat due to its fanless design, forcing performance to be throttled to keep temperatures under control. This should come as no surprise if you own an M1 Air.

If performance is throttled, as much as 25% according to some reports, the M2 will be unable to fully flex its muscles. This is reflected in the GeekBench test results, which showed 7651 for the Multicore CPU and 23,011 for the GPU. In comparison, my 14″ MBP M1 received a CPU score of 12151 and a GPU score of 37,863.

As a result, depending on the outside temperature and how hard you push the M2 Air, it may consistently fall short of its full potential. The M2 Air, thankfully, throttles less than the M1 Air, and to be fair, performance throttling is fairly common in most fanless tech these days.

Aside from that, the M2 is a beast.

It doesn’t stutter with my current workflow, which includes photo editing, video editing, 3D rendering, and a slew of other applications and tabs open.

When it came to the literally hundreds of tabs I had open or video editing 4K files in Final Cut Pro, I saw little difference between the Air M2 and my 14″ MacBook Pro M1. The M2 Air struggled to keep up, and performance throttling occurred.

So, unless you have a similar workflow to mine, the performance in this laptop will be more than adequate for you and should easily slice through tasks for years to come!

We get MagSafe 3, two USB-C Thunderbolt ports on the left side and a headphone jack for wired headphones or a microphone on the right.

I was missing the SD card slot a lot, and it reminded me how useful it is on the MacBook Pro for photography and videography.

It’s an Air, which may be an unfair comparison. And, besides, if you’re using cloud storage, the lack of ports won’t be an issue.

Depending on who you ask, the Midnight color might be an issue.

You’ll see your fingerprints all over the Air M2’s otherwise clean design unless you wash your hands with soap every 10 minutes or bought it as a shelf prop never to be touched. It appears that going a single day without a microfiber cloth is impossible.

If you’re a neat freak like me, it will get to you, but if you have the patience and care to wipe it down daily, you can’t go wrong with this color because boy, is it a looker.

The tapered shape of previous Airs is gone, but it is slimmer at.44 inches thin.

It now resembles a miniature MacBook Pro more than anything else, with the signature boxier design and uniform thickness. Some may miss the tapered wedge shape, but I prefer the new look.

The speakers are now hidden beneath the screen rather than protruding from the side of the keyboard, and the previous MacBook Air wordmark is no longer present.

The midnight color, of course, has a beautiful deep blue tinge in certain lighting to complement its overall dark mode black look.

It all adds up to a premium minimalist look that I like, is undeniably modern, and will age well.

The new design features a larger 13.6-inch screen with smaller bezels and the same notch for the new 1080p webcam, which outperforms the previous outdated 720p webcam on video calls.

A 2560 x 1664 Liquid Retina display is also included, but ProMotion is not. At 500 nits of brightness, Apple claims the display is 25% brighter than the previous Air, and it’s more than adequate for outdoor work in sunlight, but it doesn’t compare to my 14″ MacBook Pro’s 1000-nit HDR display.

However, color reproduction is excellent, and the display is as sharp and bright as most people require for tasks other than video and photo editing.

Oh, and keep in mind that the Air M2 is still limited to a single external display of up to 6K resolution, so if you need a dual or multiple display setup, you’ll need a MacBook Pro, which supports up to four displays.

The M2 Air truly shines in portability; this is its main selling point and a compelling reason to consider purchasing this laptop.

With an ultra-thin.44-inch build and feather-light weight of fewer than 3 pounds, you’ve got a seriously portable machine that’s one of the best tech companions you can take on the go.

The battery life backs this up: it provides 12-13 hours of nonstop use on a typical mix of web browsing, video watching, music playing, and some more intensive apps like Blender and Figma. Combine this battery life with the $35 fast charger upgrade, which charges the M2 Air up to 50% in 30 minutes, and you’re ready to go anywhere, at any time.

If you frequently travel, whether as a student, a remote worker, or a travel blogger, the MacBook Air M2 is a good choice.

Is it worth it?

There are many things working in its favor, but there are also some things that aren’t going so well that Apple still needs to work on.

Slower SSD speeds are a step back, performance throttling is a disaster, and the higher price point should be carefully considered.

But remember that this is an ENTRY LEVEL Mac. The Air series is Apple’s most affordable laptop.

As a result, when we stop comparing it to the Pro lineup and consider who this laptop is intended for, it becomes an extremely compelling offer.

Sure, it’s not the CHEAPEST MacBook Air; if you want the most affordable Air, the previous M1 model is still available, but based on my experience with it thus far, I believe this is the people’s laptop. Aside from prosumers, the majority of people will be satisfied with this laptop.

If the read-write speeds bother you, the absolute best in performance, look elsewhere – the Air lineup isn’t for you.